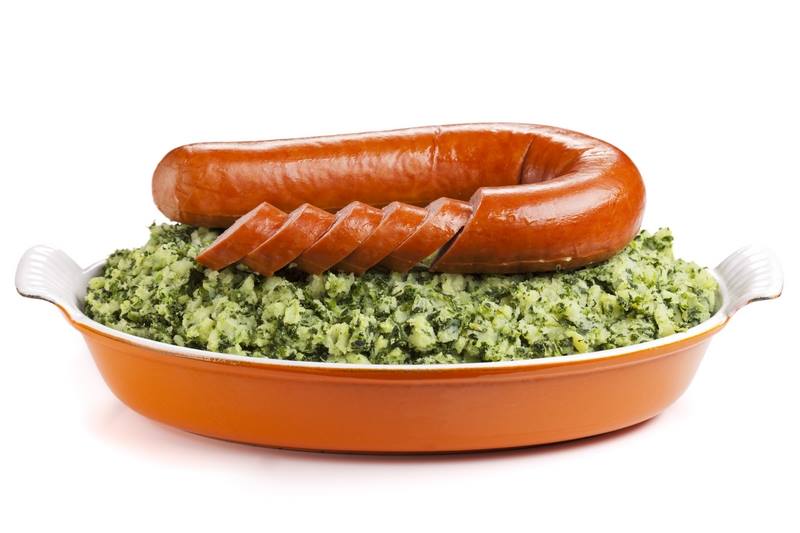 Unlike the French or the Italians, the Dutch are not generally known for their culinary traditions. Beyond the famous cheeses and ubiquitous fried snacks, everyday food in the Netherlands remains a bit of a mystery for most non-Dutch. At Global Reach Confections & More, we’ve assembled some of the more popular Dutch items and are introducing them to Canadians from coast to coast! In this blog we’ll visit some of these types of foods and pass along some tips for you our readers to bring you to the table as well! For now, and overview…

So what do the Dutch eat when no one is looking?

Stamppot, a real Dutch favourite, is basically mashed potato being used as a vehicle for a vegetable, usually a leafy green. Think of kale (boerenkool), endive (andijvie), sauerkraut (zuurkool) or even Brussels sprouts (spruitjes).

The potatoes and vegetables are mixed together with a fair amount of butter, milk and a dash of mustard, and served with worst (sausage) or meatballs.

This hearty meal is easy to make and has endless variations. Look up hutspot if you would prefer carrots and onions.

While beef stew itself is not earth-shattering cuisine, this is the Dutch version, which has its own charm.

Hachee is heavy on the onions and is cooked on a low heat for several hours. Often served with boiled potatoes, hachee is one of those dishes that is fine when it’s okay, and amazing when it’s made well.

It is the kind of thing that’s probably best when made using your (Dutch) mother’s recipe.

You can buy erwtensoep (pea soup) in a can from the supermarket, of course, but it is so much better when made at home.

Put simply, erwtensoep is the essence of what soup should be. Throw the ingredients in a pan (split peas, celery, maybe a leek or two), set it on the stove and return later to give it a few stirs before digging in.

You could add some worst to make it heartier, and it should probably be eaten with stokbrood (French bread).

The Dutch refer to erwtensoep as snert. The ideal time to enjoy a bowl of snert is when it is freezing outside (snertweer).

Haring (herring) is one of those things that every tourist has either tried or has watched in horror as someone else has tried it.

The raw herring is usually accompanied by finely chopped onions (uitjes) and pickles (zuur). It can be eaten with bread (broodje haring), from a paper plate with a little toothpick (tricky) or whole, hung from the tail as you takes small bites (even trickier: leave this one to the professionals).

This distinctively Dutch spiced biscuit is available year round, but it comes into its own around Sinterklaas (early December).

Another delight for the sweet-tooth, poffertjes are small pancakes, cooked in special poffertje pans. They are puffy, bite-sized and served with lashings of butter and powdered sugar.

If the thought of tackling a full-sized Dutch pancake (pannekoek) dripping in syrup (stroop) is a bit much, then a serving of poffertjes is usually just right.