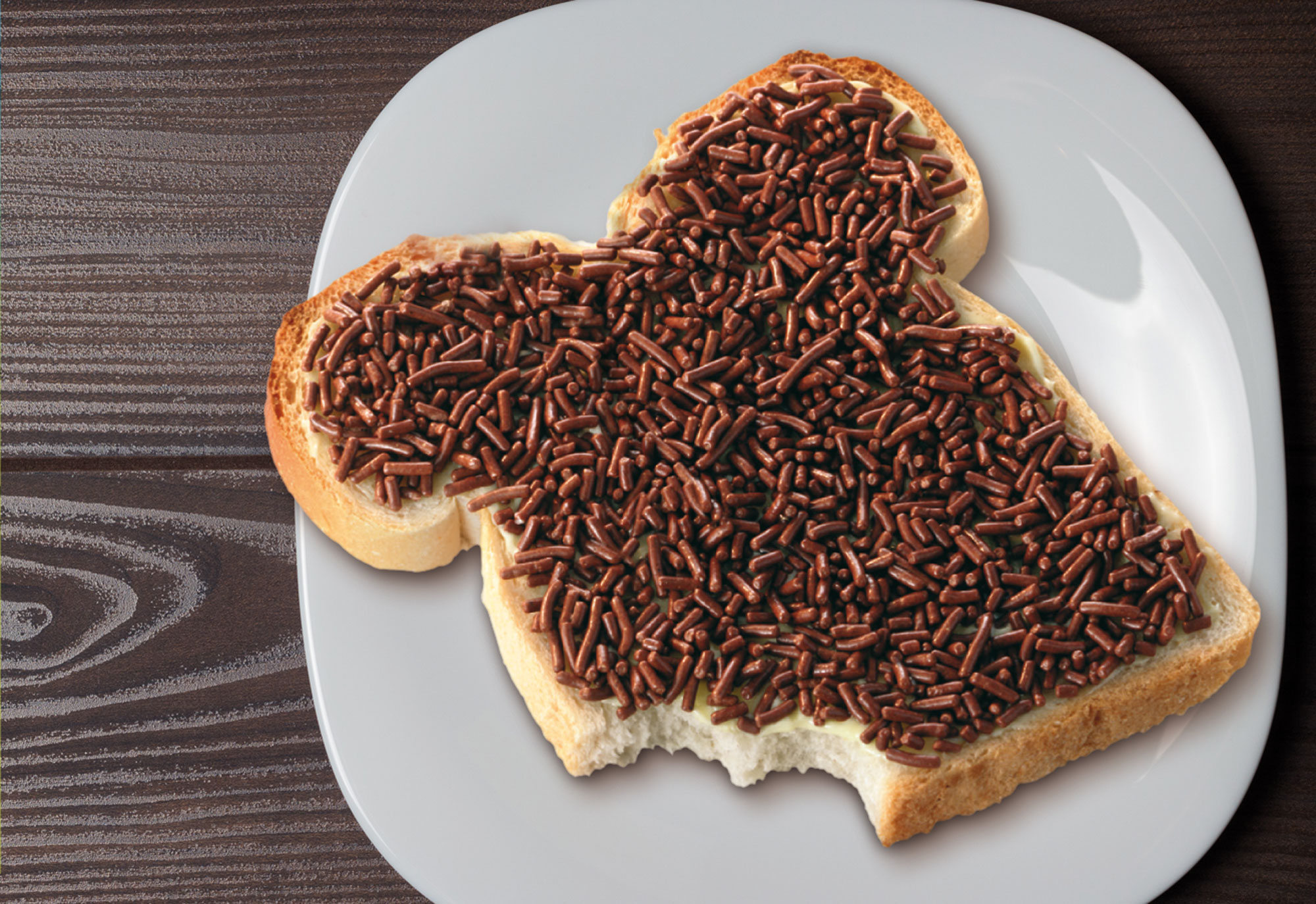 In the Netherlands, hagelslag refers to small pieces of confectionery, similar to sprinkles, that are used as a topping for buttered bread. This iconic Dutch food is eaten at meals or as a snack and is popular with both children and adults. Hagelslag is offered in a variety of flavors and colors, with chocolate being the most common. It is popular in the Netherlands, Belgium, and the former Dutch colonies of Suriname, the Dutch Antilles, and Indonesia. The chocolate variety is also called chocoladehagelslag (chocolate hagelslag), and in Belgium, muisjes (mice) or muizenstrontjes (mouse droppings).

What Is Dutch Hagelslag?

Some say that hagelslag was an Amsterdam invention and was likely created by candymaker B.E. Dieperink, who was director of the company which is now called Venz. The story goes that on a day in 1919 when it was hailing outside, Dieperink came up with the first variety of hagelslag—crispy, anise-flavored granules—and named them “hagelslag,” which means “hailstorm” in Dutch. They were a huge commercial success.​

By 1928, another candy company called De Ruijter had created its own version of hagelslag. In addition to anise-flavored sprinkles, the company offered lemon, raspberry, and orange. Eight years later, Venz began mass-producing chocolate hagelslag, the only company that can use the term hagelslag; that is why only “Hagel” appears on the packaging of other chocolate sprinkle brands. De Ruijter began to make the chocolate variety in 1957.

Hagelslag is similar to sprinkles in their appearance, but that is where the likeness ends. In order for chocolate hagelslag to be called chocoladehagelslag, it needs to contain at least 32 percent cocoa. On the other hand, American chocolate sprinkles are made of very little cocoa and are mostly sugar, corn syrup, lecithin, and carnauba wax. Hagelslag is also available in a variety of chocolate flavors including milk, dark chocolate, extra-dark chocolate, and a mix of dark and white chocolate. Of course, one of the main differences is how they are enjoyed—sprinkles are used in desserts only, whereas hagelslag is eaten most often at breakfast.

Hagelslag is available in a large variety of flavors including chocolate, anise, and fruit (vruchtenhagel). Other varieties are sometimes created for holidays and special events, such as pastel-colored hagelslag for Easter and orange hagelslag for major Dutch sporting events or King’s Day. Closely related to hagelslag are curly chocolate flakes known as chocoladevlokken.

This sweet confection is used as a topping on buttered beschuit, a piece of round toast that is baked twice and eaten with breakfast, lunch, or as a snack. It is also a Dutch tradition that anise hagelslag, which comes in pink and blue, is served to guests visiting a new baby, the color coordinating with the gender.

How to Eat Dutch Hagelslag

It is very simple to prepare hagelslag for eating; all that is needed is bread, butter, and the hagelslag flavor of choice. To make the experience as authentic as possible, a thick slice of Dutch country bread is best, along with some European butter. Many Dutch people have been known to simply enjoy the hagelslag straight from the package, pouring it directly into their mouths. Of course, hagelslag can be used similarly to sprinkles in desserts.

Each flavor of hagelslag has its own unique taste. Since the chocolate has a large percentage of cocoa, they taste like chocolate. The fruit varieties are light, sweet, and have a fruity flavor, while the anise seeds taste of licorice. Hagelslag has much less of an artificial taste and waxiness than chocolate and colored sprinkles.